“The Malibu Pier is historically significant and one of the great piers of the State of California.” – John Foster, Senior State Archaeologist, California State Parks (Retired)

The Malibu Pier was originally built in 1905 to support the operations of Frederick Hastings Rindge’s Malibu Rancho. Hides, grains, fruit, and other agricultural products were shipped from the pier either directly or by transfer to larger vessels. Building materials and other Rancho necessities arrived at the pier. The Rindge private railroad, used for freight movement within the ranch, had a terminus near the pier.

In 1934, the pier was opened to the public for pier and charter fishing. Fishermen were also shuttled back and forth from the pier and the barge Minnie A. Caine anchored a mile off shore. After the bankruptcy of Marblehead Land Co. (the Rindge’s land operation) in 1936, the Malibu Pier was taken over by bondholders who had helped finance Malibu development. The pier was extended to its current 780-foot length, and the first small bait and tackle shop building was constructed at the ocean end by 1938.

View from the historic tower at the base of the pier.

During World War II, the end of the pier served as a U.S. Coast Guard daylight lookout station until an intense storm in the winter of 1943-1944. The end of the pier, including the bait and tackle shop, was destroyed and had to be rebuilt. The remains of the pier were sold to William Huber’s Malibu Pier Company for $50,000 with the proviso that he would construct a building for the Coast Guard to re-occupy. After the end of the war, Huber expanded the pier and built the familiar twin buildings at the end for a bait and tackle shop plus a restaurant.

In 1960, an artificial reef was constructed in the ocean about one mile southeast of the pier in an attempt to protect it from ocean damage. The reef was composed of concrete pilings, derelict streetcars and other heavy materials.

Sports fishing boats operated from the Pier until the early 1960s. The building near the land end of the pier (intended for the Coast Guard) became the Malibu Sports Club Restaurant in 1966, then the Malibu Pier Club after a change of owners, and then Alice’s Restaurant (yes, named for the song) from 1972 to the closure of the pier in the 1990s. 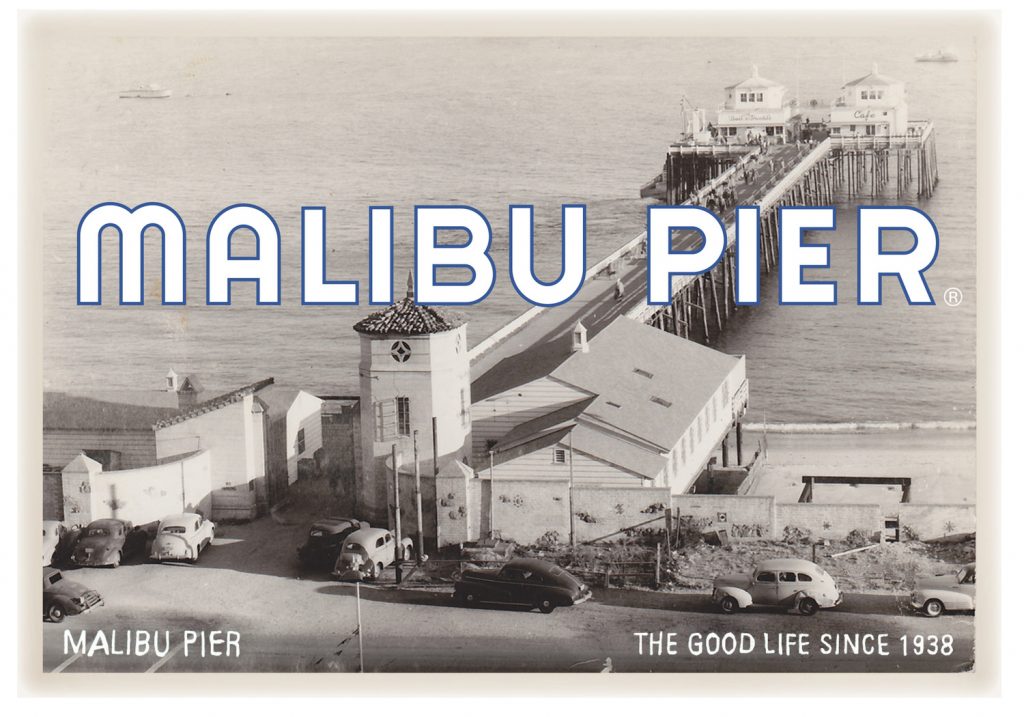 On February 10, 1980 a real estate auction was held in Malibu and the star property offered was the Malibu Pier, the first time Bill Huber put it up for sale. Bids of $3 million and $3.1 million were received but Huber did not sell at that time. Later that year, the State of California did buy the pier, in somewhat battered condition. The pier continued to operate under the State Department of Parks and Recreation, that leased space to the commercial operations on the pier.

In 1985, the Los Angeles County Board of Supervisors voted unanimously to recommend the pier for registration as a Point of Historical Interest.  The historic pier was heavily damaged in the El Niño storms in 1993 and another storm severely damaged it again in 1995. It was declared unsafe and the State closed it to the public. In 1997, California transferred the pier to the City of Malibu with the provision that Malibu fix and maintain it, something the City did not have the funds to do. The pier reverted to the State.

After restoration, the pier reopened in 2008 and has again welcomed fishermen, movie stars and visitors from the around the world.

On August 25, 2014, Hurricane Marie off the Baja Coast caused waves that crested just below the deck causing damage to many pilings as well as the landing.  Repairs are underway and will be completed in 2017.

Ranch at the Pier

The iconic Malibu Pier once supplied supplied the entire Rancho Malibu area. Today, Alice Bamford and Anne Eysenring, owners of Ranch at the Pier lifestyle store, reside just minutes away, in the canyons above the pier, at ONE GUN RANCH which serves as a kind of ground zero for sustainable agriculture, employing earth friendly “biodynamic” techniques, while continuing the Farming tradition.

They created a unique shopping experience at the Pier that encompasses the local lifestyle vibe and managed to put it all in one place.

“It’s inviting our guests to enjoy the incredible elemental life along the Californian coast. The pier is a state park and we want to continue the magic of it. Its vital for us to represent and showcase local artisans and homegrown brands in our space. Ranch at the Pier celebrate the history of Malibu and the California coast: the surf & skate culture, the magnificent nature & hiking, the fishing, boating and auto/motorcycle culture. The shop represents everything that Malibu is, and we hope guests from all over will see that we’ve put Malibu under a magnifying glass for everyone to see and enjoy. Annie and I utilize and live everything Malibu have to offer, from the growing of crops to the cycling down the roads to horseback riding the trails to surfing in the water. It’s rare that people have all of that, that they enjoy in one place. We feel incredibly blessed, privileged and lucky to be here. Malibu Pier offers escape for people, from their everyday lives and reality. We want to make Ranch at the Pier a space that incorporates all of it.” – Alice Bamford 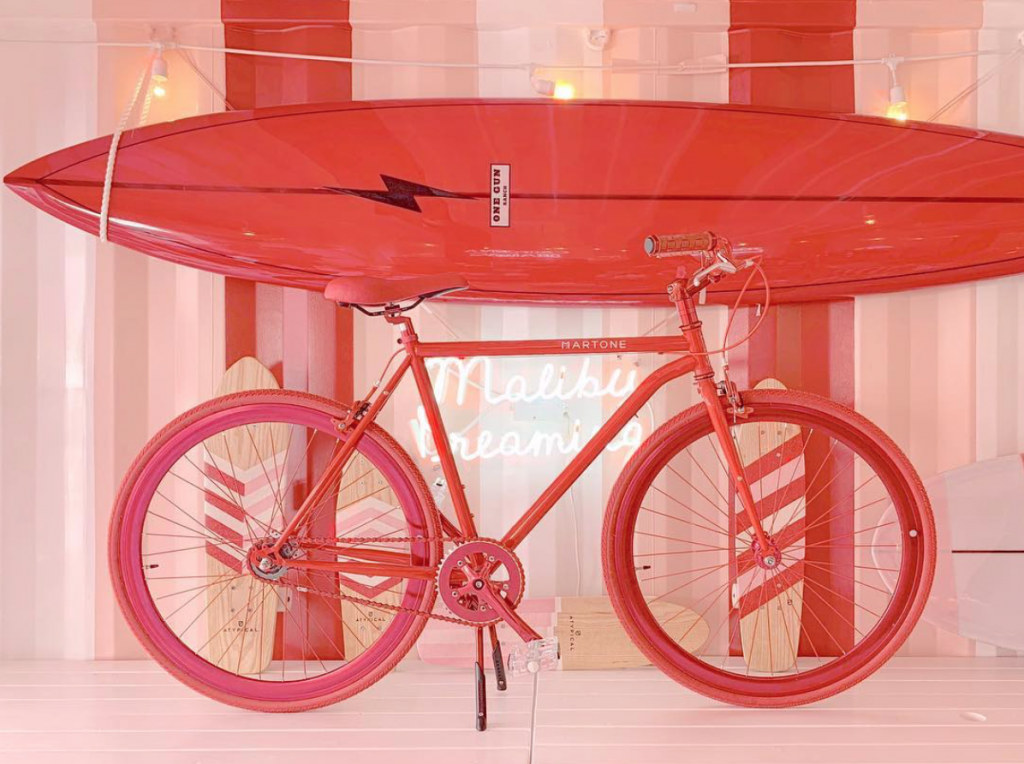 SPA offering the BAMFORD line of organic products and luxury accessories from the UK.

GIFT whether local or from a far end of our earth, everything is chosen to be as unique as Malibu itself. 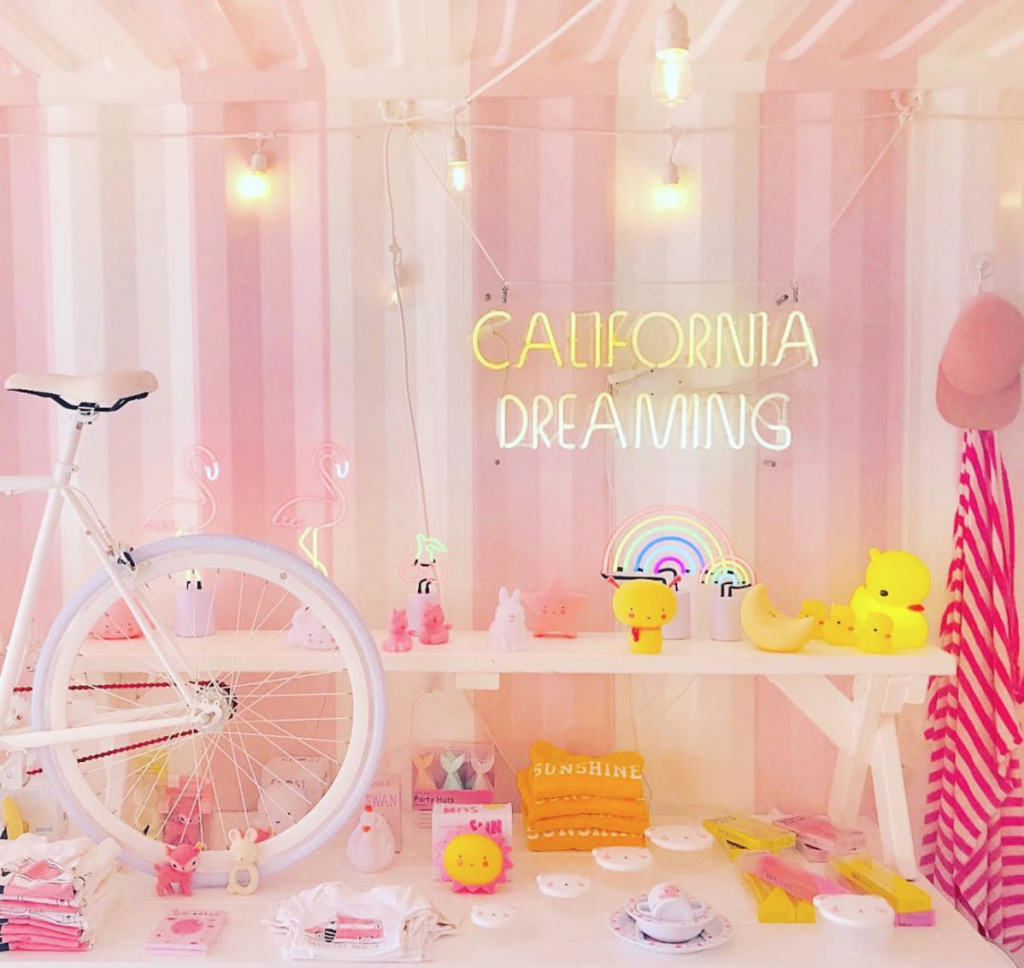 ROD RENTAL catch a fish on the pier. We can set you up with the essentials regardless of age or experience. Please give us a call for more information.

FISHING PERMITS we can issue State fishing permits & report cards (permits are not required to fish from the pier). 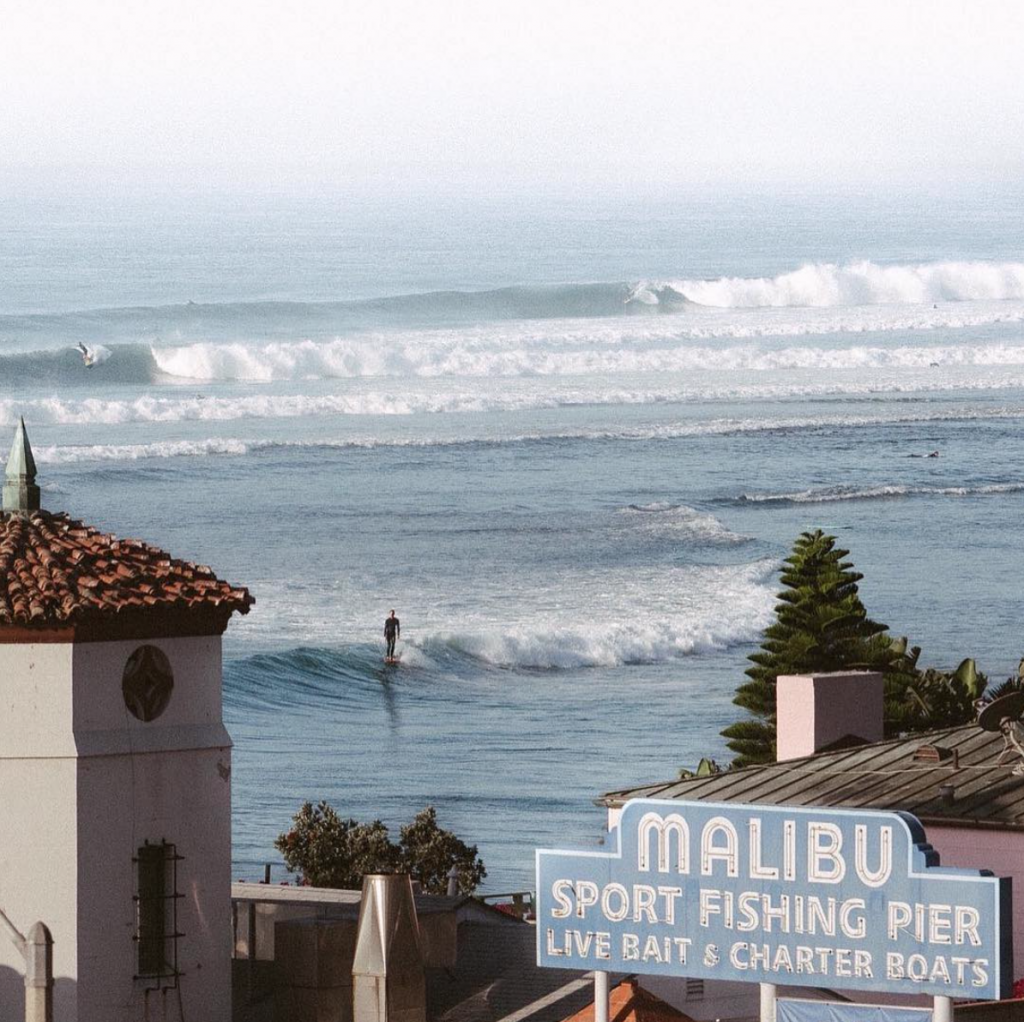 The cafe is casual counter service cafe at the end of the Malibu Pier where you can watch the surfers and dolphins at First Point. A full service restaurant and bar at the beginning of the pier with a beautiful open bar with outside seating and expansive ocean views. 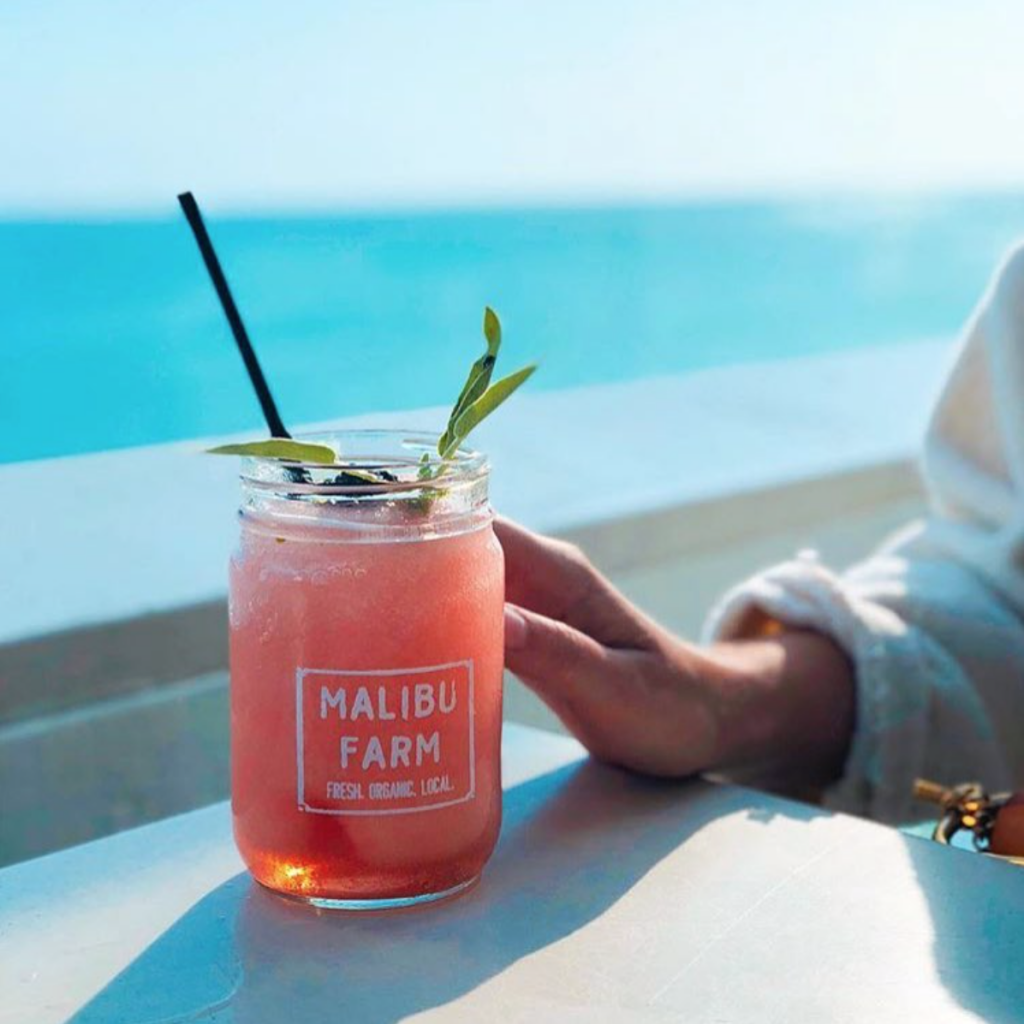 The Malibu Farm cookbook featuring all the original recipes is available online, and in bookstores. 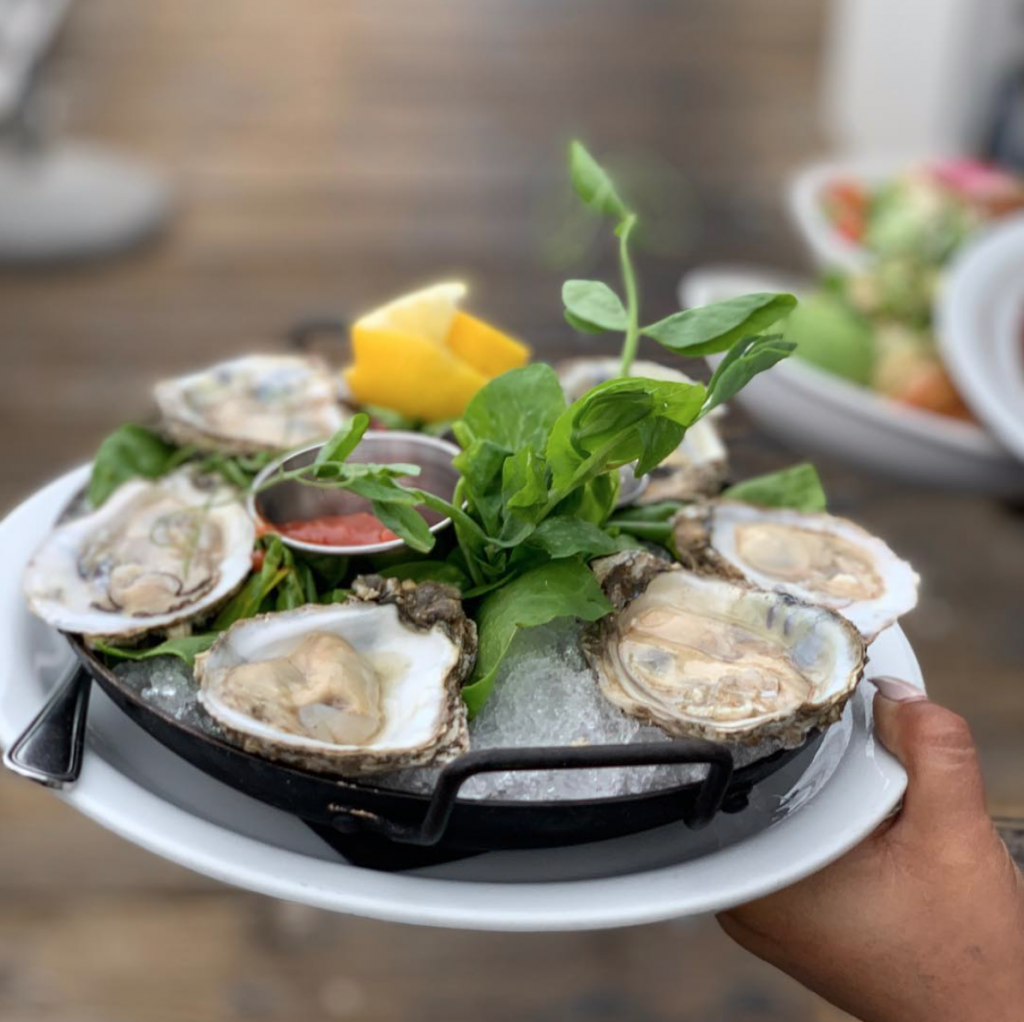