As the temperatures start to dip into a west coast version of winter, locals begin to prepare for cozy long nights anticipating the holiday season – which as we know, will be wildly different from the holidays of seasons past.

Our cover story, the fiercly popular actress and British gem Patsy Palmer, inspires us with her festive jewel toned hues and a dose of her daily wellness regimen – much needed advice during  a hectic holiday season.

The British beauty doesn’t stop there – our next feature, English model and designer, Catalina Guirado,  is interviewed by our very own English rose, Beauty and Lifestyle Editor Tara Owens. Guirado talks about her incredibly chic equestrian scarves (no horse required to sport these beauties!) and her collaboration with the Tracy Park Gallery to exhibit her late father, Juan Antonio Guirado’s art. It is the first time the Guirado Estate is releasing paintings on the market with a gallery.

Malibu is well-known for our horse loving community and no one is loved more in that circle than local icon Gina McCloskey. Contributor Amelia Rose Simpson profiles this beloved member of the community.

Greg Alterman, is back in the game after taking a

hiatus from his next -evel cold pressed juice brand, Juice Served Here, which is now making its way back to a

grocery-store-wellness-outlet near you in early 2022.

Speaking of good for the soul, the efforts of the Los Angeles Sheriff’s Department Homeless Outreach Team in collaboration with the Lost Hills Station, Malibu City officials and county officials has made a significant impact in our community as we approach Santa Ana wind season and the third anniversary of the Woolsey Fire.

We are “Abundantly Autumn” Malibu. Good vibes all around. 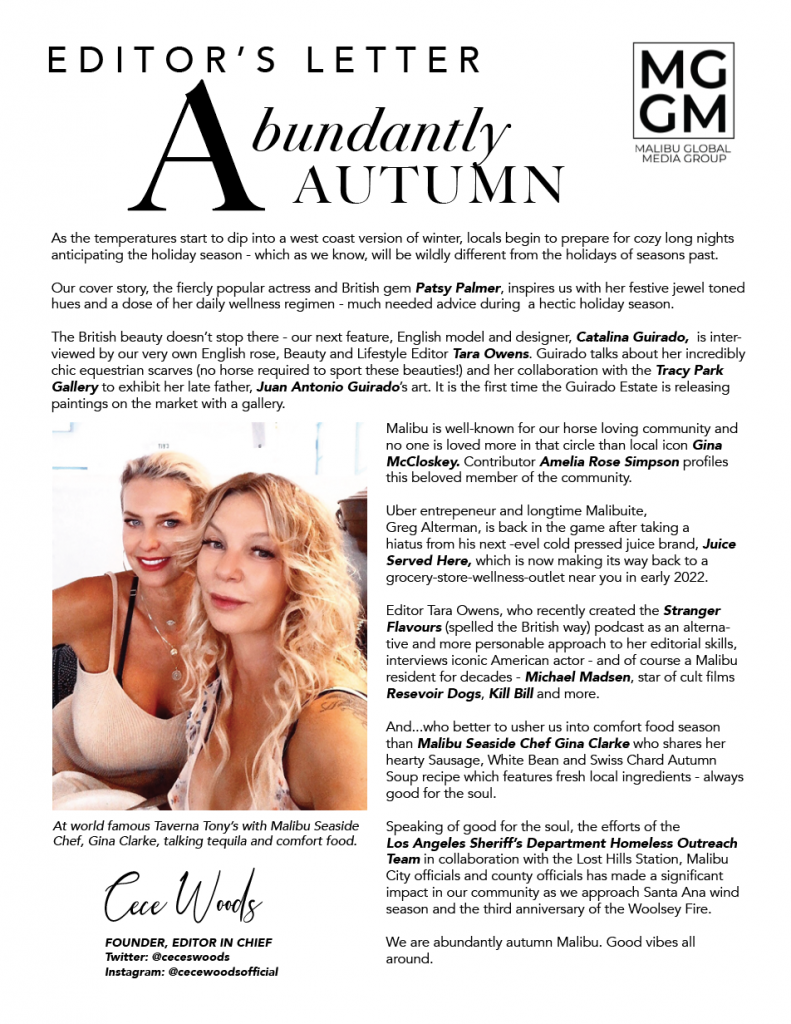